I have a bit of a reputation for hating chain restaurants. It's not so much chain restaurants as overprice mediocrity that bothers me. There are chain restaurants I love--Cracker Barrel, Sonic, Baja Fresh... and those that I hate--O'Charley's, Applebees, J. Alexander's, Chili's... Okay, the list is too long for me to write here, but what most of the restaurants I don't like have in common is that there's this level of falseness that's presented as genuine. Oh, nevermind--that's too technical and can apply to Cracker Barrel. My problem is that the food is often overpriced and under-good. Why go to O'Charley's for potato soup when it's nothing like what potato soup should be? And do people really pay multiple dollars for 1/4 of a head of lettuce with dressing? Also, they all seem to be essentially the same restaurant. And then there's this place that's popped up around this area called Cheddar's. Cheddar's? It's like the Mike Judge really wanted to bring Chotchkie's to life but didn't want to be that cheeky about it.

And then there's Red Robin. I'd read on Nashville Scene's Bites blog that it was beloved by several. Something about milkshakes, maybe. Why go to Red Robin when just down the street there is a locally-owned, long-standing treasure called Bobbie's Dairy Dip? Excellent food and excellent frozen treats. 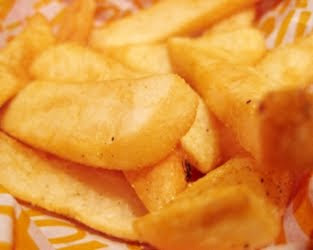 "Yes, steak fries, too! All you can eat! And they have veggie burgers, you know."
"No, I did NOT know. EITHER of those things." Y'see, I've been on a bit of a fry kick lately, even going so far as to pay a co-worker to go to Arby's for me. Bottomless basket of steak fries is good, but a bottomless basket of curly fries would be deadly to me, I'm certain (coming close is the standard side order of fries at Beyond the Edge--oh, how I love them).

So I spent the afternoon thinking about unlimited fries and when I got home, I asked the husband what he was going to cook me for dinner (ha!). He said, "What do you want?" and I said, "Well, I was thinking about Red Robin."

Naturally, he thought it was a joke. When I told him it was not, he practically gave himself whiplash getting out of the recliner to get his shoes on. He did not want to give me the opportunity to change my mind.

So we went. Observations:
1. The vast majority of the patrons at Red Robin had small children with them. I guess because it's a kid-friendly place that actually serves alcohol. We were one of only three parties in the whole place without a minor. I don't usually go to such places. Actually, I can't think of such a place.
2. The service is amazing. No trouble getting that second basket of fries.
3. Second basket of fries was the priority, so I did not have a milkshake and ate only three or four bites of my Gardenburger. I took it home and ate it later. Though fries don't re-heat well, so the last remaining fry that I simply could not fit in my stomach stayed in the basket.
4. Dang, steak fries, unlike their skinny counterparts are like those expanding sponges inside your stomach. I was miserable after what seemed like just two reasonable sized portions of fries.
5. The husband, seizing the opportunity to eat red meat whenever possible, got something called a Banzi burger. All I could see was cheese. Though could I really say anything as I was scarfing down hand over fist of empty calories? No. My Gardenburger on wheat with shredded lettuce and tomato was very nice (and healthy), however. Bocas are an option, too (but I prefer Gardenburgers--I just like the taste more).

So yeah, I did it. I was lured in by the call of the fat and I participated in what I can only deem a spud bacchanalia. But I probably won't go back soon. There is a Sonic nearby, after all.