I love arepas. Whether at Bonnaroo or my favorite little place in NYC. But there's more to Venezuelan food and a lot of it is vegetarian-friendly. I got a crash course in making my own arepas and empanadas as well as a few other dishes from my friend who lived there many years during her childhood. My friend happens to be a wonderful cook, thankfully!

Since then, I've had a Venezuelan feast of my own. Twice! Arepas, empanadas, pigeon peas and rice and plantains. My preparation isn't as authentic or good, but I'm still pretty happy with what I've come up with.

If you're interested in preparing a Venezuelan dinner at home, the first thing you need to do is get Harina P.A.N. flour. Here in Nashville, it's available at the K&S International Markets as well as the Publix on Charlotte Pike (and perhaps at other locations). There are white and yellow versions and just like with cornmeal, the choice should be based on your preference. I like yellow, which is a bit sweeter. Next, learn how to make arepas. Oh, that's why you're reading? Well, there are some nice video tutorials, but here's the short version:

1. Pour some flour into a bowl (start with two cups), add a pinch of salt and then set aside two cups of water.
2. Add the water slowly, mixing briskly with your fingers to get out any lumps and until it feels like the consistency of Play-Doh--it should stick together well, but not to your hands. You may need to add more water as you make the arepas if they start to dry out, so keep it nearby.
3. Next, you pinch off some dough, roll it into a ball and then flatten it into a disk. Fry it on both sides in a well-seasoned skillet or with a tiny bit of oil until it's browned "like the spots of a leopard."
4. Once you have the number you want, put them on a baking sheet in the oven to cook for about 15-20 minutes on 250 degrees (time depends on thickness). When they're cooked through, they'll sound hollow when thumped. 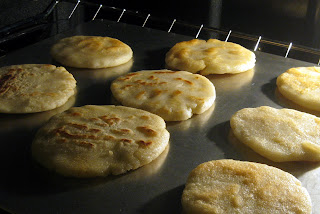 Arepas fried and now baking in the oven

And you're done. THAT'S IT. It's that easy! What to do now? If they're thick enough, cut them in the middle to form a pocket to stuff with cheese (queso fresco) and avocado and cilantro or top them with your favorite things. For breakfast, top them with cheese or a fried egg. Or just eat them plain. 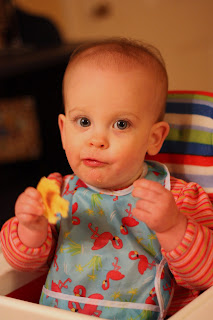 For empanadas, flatten your disc a little thinner, put some cheese and cilantro on it, fold it together side-to-side and cut out a half-moon shape with a small bowl. Cook it until the cheese has melted. THAT'S IT. Really!

Next up, pigeon peas and rice. Both K&S and Publix sells canned peas. I used Mahatma yellow rice, cooked it according to directions, added the peas (drained) and shook in some Jamaican curry powder (a spice blend comprised mostly of turmeric and cumin--also available at both K&S and Publix) and a little salsa. THAT'S IT! (Sensing a theme? Yes, it's really easy to have a good Venezuelan meal with little effort and just a little more time).

And to top it all off, fried plantains. This is the easiest part because both K&S and Publix have frozen plantains ready to just heat in a skillet (THAT'S IT) and they're delicious. Seems like it would be easy to prepare them from a fresh plantain, but it's not. Trust me and Mr. Eats who ate a woody, hollow fried plantain that was terrible. Don't be fancy y'all; use the frozen plantains. Might even be cheaper than buying a fresh one.

If you don't cook the whole meal, do think about adding arepas to your repertoire. They're as impressive to your family/guests as they are easy to make. Really! 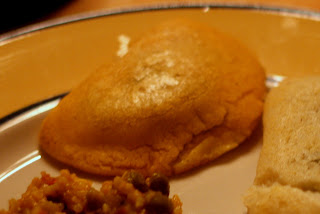 The arepas were still baking, so we started with the empanadas--one yellow, one white

2 thoughts on “A Venezuelan feast”