During our recent trip to Memphis, I stopped by the old Midtown Seessel’s Schnuck’s and picked up some Pancho’s cheese dip and Tropicale dressing. Pancho’s is one of the many things I miss about Memphis and one of the things that bonds those of us who grew up there. There’s nothing even vaguely authentic Mexican about Pancho’s but it is unique among Tex-Mex with flavors specific to the palates of Memphians in the 1950s ('ya gettin' the picture here?). And I love it.

First, the cheese dip. It’s made with American cheese and Ro-Tel tomatoes. It’s served cold. When I first served a chip to Mr. Eats with this cold dip, he replied, “Hmm. Good. But it’ll be better when it’s warmed up.” Heresy!

And then there’s the Pancho’s Tropicale dressing. It’s served on their salads, including the chicken fajita salad that was a favorite of mine until I became a vegetarian ten years ago (I still order it sans chicken). My mom and I were having a discussion about it one time and she said that it was really easy to make (though she hates it). She just walked into the kitchen, threw a few things together and there it was. I was really impressed.

But the recipe I have--clipped about 15 years ago--is from a favorite column in the Memphis Commercial Appeal, the Recipe Finder. It’s a fun column that’s been around for as long as I can remember; most of the clipped recipes I have are from this column when I first started really cooking for myself in the mid-1990s. The recipes are usually either those that people are trying to recreate from childhood memories or from local restaurants (past and present).

Process everything except oregano in a blender (or use a stick blender) until sugar is dissolved. Stir in oregano Refrigerate at least 2 hours.

Tips: use just ¼ cup of sugar if you’re concerned about sweetness. And improve the color by using light olive oil and/or a touch of prepared mustard.

I recreated the chicken fajita salad by using Quorn Chick’n Tenders lightly sautéed and sprinkled with fajita seasoning and tortilla bowls from Azteca.

Mr. Eats was a lot more impressed with the salad and dressing. Though the cold cheese dip is growing on him (so to speak…I hope--ha!). 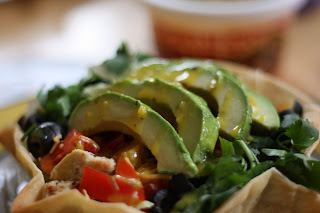 *Note: new camera! I hope to take photos as good and delectable as those on Love and Olive Oil and Eat.Drink.Smile.!

Got my booster shot this past weekend, so Mr. Eats