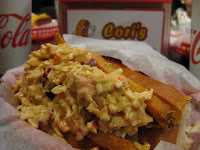 But sometimes, I still indulge. And this week, there was a special occasion. My friend, Christy was out from Las Vegas for a visit. After picking her up from the airport, we headed to Mount Juliet to meet our other friend and have some dinner. Three women and three babies in the suburbs. It wasn't something I thought I'd blog about. But it just so happens I was catching up on this thread at Bites and decided, what the heck, I'll see what I can find out about Cori's Dog House.

Luckily, the Urban Spoon Listing for Cori's Dog House includes the menu. Holy um, dog! That's quite a menu. Veggie dogs! Fried pickles! Pimiento cheese! I convinced my friends that we just had to go there.

After contemplating the Georgia and the Jersey Italian, I settled on the Pittsburgh--fries, slaw, tomatoes and provolone cheese. Obviously, even though it was served with a Smart Dog, this was not health food. The cole slaw was creamy, the fries were crispy (with skins, just like I like them) and the whole production is served on a thick buttered roll. Delicious. I also got an order of fried pickles, which had an unexpected kick that (mercifully) slowed me down a bit on the munching.

Hot dog joints are starting to get as popular as cupcake shops here but Cori's is the only one I've been to. Though most other hot dog places offer veggie dogs, too, Cori's seems to have the largest, most creative menu and best prices. It's tucked into the popular strip mall and chain restaurant heaven known as Providence Marketplace, but best I can tell, it's popular (it's back past the freestanding restaurants such as Olive Garden). There was a good crowd on a Tuesday night and they were even having to turn people away after the 8pm closing time (Daylight Saving Time is rough on restaurants and restaurant-goers). The staff is friendly and patient (three babies!) and the food is prepared quickly. We had a great time and though I usually don't travel more than twenty miles for a meal, I've promised Mr. Eats that we can go back. Mmm...fried pickles.

It's a repeat of sorts, but the touch-me-nots are

The weather's not bad in Nashville today, but I'd

I rarely drink alcohol any more, but this here ama